My eldest daughter and her husbands best friends are getting married today!  They are both in the wedding party…..so I thought I would repost about our favorite wedding flower….the peony.

Peonies date to at least 1,000 B.C. These long-lived plants, some of which  are known to survive for as long as 100 years, are prized for their sturdy  foliage, lush blooms and sweet scent. Early American settlers brought peony  plants across the ocean and planted them on American soil to remind them of the homes  they had left behind.

Peony blossoms come in shades of white,  cream, pink, rose and deep red;  yellow-flowered peonies are more rare. Obviously, I am partial to the pink peony! Although  they bloom only in late spring or early summer, their glossy leaves remain an  attractive backdrop to the perennial border throughout the growing season.  Plants are available in both herbaceous (meaning that the leaves die to the  ground each winter) and tree forms. The herbaceous Paeonia lactiflora, also  known as the Chinese peony, is probably the best known and most widely grown.  When first cultivated by the Chinese, peonies were bred to produce huge, double  blooms. When the plant was introduced to Japan, it was hybridized to produce  more simple flowers, which became known as the Japanese form. Paeonia  suffruticosa, the tree peony, is a deciduous shrub usually between 3 and 4 feet  in height, although some varieties can reach 6 feet. 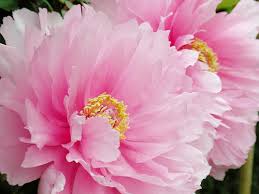 Revered since ancient times, the peony has numerous legends attached to it.  It gets its name from a Greek myth in which Paeon, physician to the gods,  angered his teacher Asclepius, the god of medicine and healing. When Asclepius  threatened to kill Paeon out of jealousy, Zeus saved him by changing him into  the lovely flower we know today as the peony. In another legend, Paeon is a  mortal who is spared death by being transformed into a beautiful flower.

The exquisite peony flower has long been a favorite of Asian artists and  appears not only in painting but poetry and literature as well. It is a frequent  motif in Chinese art, featured on screen paintings, clothing and woodblocks. The  peony is also a much-loved subject of Japanese artists, who have used it to  adorn tapestries and porcelain. European artists, such as Pierre-Auguste Renoir  and Vincent van Gogh, also sought to capture the peony’s beauty on canvas. 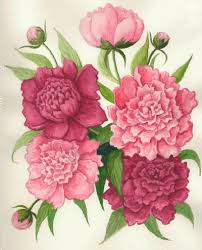 The ancient Chinese discovered that the peony’s bark, roots, seeds and  flowers served as medicine. Mu Dan Pi, a remedy made from the bark of the tree  peony, was believed to cool the blood and provide antiseptic properties. Chi  Shao Yao, made from the roots of the herbaceous peony, was believed to cool the  blood and provide pain relief. When the peony was brought to Europe in the  1200s, it was used to ease childbirth, ward off evil spirits and cure  gallstones. Although peonies have been used continually in traditional Eastern  medicine, they have not been used in Western medicine since medieval times. The  buds and leaves of the peony are used in China to make a delicate white tea  which many believe to have medicinal qualities. 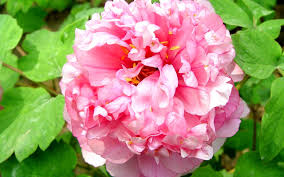 Together with the plum blossom, the peony is a national floral symbol of the  country of China. The Chinese name for peony means “beautiful” and in Chinese  culture the flowers represent riches, prosperity and honor. In Western culture,  the peony serves as the symbol for the 12th wedding anniversary, and in the  language of flowers, represents good fortune and a happy marriage. In Victorian  times, it might also have represented bashfulness, since mischievous nymphs were  said to hide in its magnificent petals.

One thought on “Peonies = Happy Marriage!”

The Secret Language of Flowers

The Secret Language of Flowers

I Just Want It To Be Perfect

Calm down. It's only the biggest day of your life.

Welcome to my world!

Discover God's beautiful design for you as a woman and wife!

Mom in the Garden

Enjoying life. In Ireland. With my family.

this is real life in the midwest

A Virginia garden through the seasons

Untapped Grilling and Other Addictions

Seven years ago I started this adventure not really sure what would be my imprint on blogging. Twenty-one hundred days later the evidence is in the following posts and I await your impression.

Sustainable living in the Irish countryside.

the state or condition of being a garden

Rantings of an Amateur Chef

The place of Nature in the 'ordinary' Spiritual Life through Meditation using Macro Photography to illustrate.